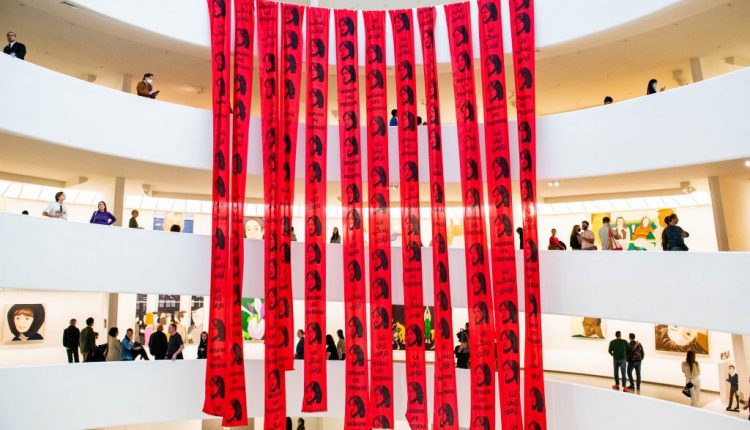 An artist collective staged a protest at the Solomon R. Guggenheim Museum over the weekend, dramatically unfurling a dozen blood red banners from the top floor of the building’s famed rotunda to call attention to ongoing protests in Iran over its unpopular mandatory hijab law.

“This homage is a call for action to support the current revolution in Iran, led by brave Iranian women risking their lives to stand up against oppression to overthrow a longtime authoritarian regime,” the group, called the Anonymous Artist Collective for Iran, said in a statement.

On September 16, 22-year-old Mahsa Amini, known as Jina or Zhina, died in Iran under suspicious circumstances after having been arrested by Tehran “morality police” for wearing her headscarf improperly. (Iranian women have been required to wear a hijab covering their hair while in public since the Iranian Revolution in 1979.)

According to eyewitness accounts, Amini died due to police brutality. Her death has triggered widespread protests led by women across the nation, followed by government crackdowns on internet access and cell phone service. Authorities are believed to have killed at least 200 people to date. The Guggenheim action was designed to raise awareness in the art world of the protest movement and its fight for human rights and women’s freedom.

“The people of Iran are subjected to horrific violence and brutality on a daily basis,” the collective said. “With restricted internet access and minimal coverage by Western media, it is time to see them and hear them by shedding light on their fearless fight against a totalitarian system.” “Zan zendegi azadi! Woman, life, freedom! This Kurdish chant has become a rallying manifesto—shouted across the world in Kurdish, Persian, English, and dozens of other languages,” the group added. “The movement started in Jina’s hometown and has since spread like wildfire across the nation and beyond. It is now a global call for us to take a leap forward towards gender equality and universal liberation.”

The group’s demonstration is not the first time anonymous artists have made a dramatic statement in support of the Iranian protest movement. Earlier this month, an anonymous artist is said to be responsible for dying several public fountains in Tehran bright red. The Twitter account @1500tasvir said the crimson pools were an artwork with a Persian title that translates to “Tehran sinking in blood.” A pool dyed red outside the Artists Forum at Honarmandan Park in the Iranian capital Tehran, reportedly in an anonymous artist protest responding to the death of Mahsa Amini in police custody. Photo by AFP via Getty Images.

“Unfortunately, in the past 40 years, [Iran’s progressive movement hasn’t] been able to create political groups that can stand up to the government,” Pamela Karimi, author of Alternative Iran: Contemporary Art and Critical Spatial Practice, told the Washington Post. “Because of that, art has become a tool in the hands of the people to communicate their unhappiness with the system.”

Saturday’s action at the Guggenheim coincided with large-scale demonstrations across the world in solidarity with the women of Iran, including protests held in Los Angeles, Berlin, and Washington, D.C.

The 12 banners displayed at the Guggenheim featured a black stenciled portrait of Amini accompanied by the slogan “Women, Life, Liberty” in the original Kurdish.

“Mahsa will never be forgotten and the cruel injustice done to the women of Iran can no longer be ignored,” the Anonymous Artist Collective for Iran said. “Their fight for freedom is all of our fight.”