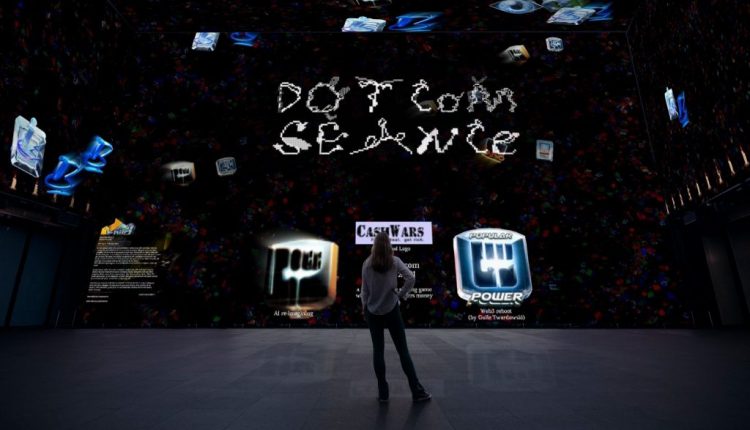 When Outernet Arts, a new initiative to bring year-round digital programming to London, opens to the public on October 16, it launches with Dotcom Séance, a major new commission by the artist Simon Denny.

For this large scale digital installation, made in collaboration with Guile Twardowski, the artist behind the NFT collection CryptoKitties, Denny has resurrected 21 early-web companies that have long been considered “dead” after the dotcom crash of the early 2000s. These include pets.com, alladvantage.com (which paid users to look at browsers), eCircles.com (which allowed photo sharing between circles of friends), and cashwars.com.

The idea was inspired by the website “Fucked Company”—a parody of “Fast Company,” one of the titans of the dotcom boom—that Denny calls “a sort of online graveyard listing the names, years of operation, and original logos of companies that failed when the dotcom bubble burst.”

Each of the 21 companies have been “summoned” by being assigned new logos, generated by a text-to-image A.I. algorithm before, inevitably, getting minted as NFTs. Holders will also be able to register an ENS subdomain and become “employees” of their chosen resurrected dotcom company.

“That was the original mechanism for ‘reviving’ the companies—in a sense, reanimating the spirits of Web1 using Web3 technology,” Denny told Artnet News.

In-person visitors to the séance will enter an immersive audiovisual world “haunted by the dead companies’ ghosts,” the artist added. For those wanting to join the communion with the digital dead, a few of the NFTs are still available to mint on the Dotcom Séance website.

By bringing these sites back to life, Denny prompts us to reimagine them in today’s context of Web3, which has sought to revive some romanticized features from the earliest years of the internet, before the supremacy of social media and Big Tech giants. In doing so, the work exposes the cyclical nature of trends and business strategies.

“Even though both culture and technology have changed significantly in the last 20 years, certain ideas have persisted,” Denny said. “[The séance] touches on something uncanny about how, in the tech and business world, nothing goes away—it just resurfaces in different forms. This also rhymes with the workings of A.I., where training data is input and reformulated into new, uncanny outputs.”

The project was partly inspired by a quote from the major tech investor Marc Andreessen, who in 1994 co-founded the now-defunct web browser Netscape, and who has since supported many Web3 startups. “There are no bad ideas in tech,” he said, “only bad timing.”

“Web3 could become a means by which ideas that were ahead of their time in Web1 can be realized,” Denny suggested.

“Many of the companies that are brought back from the ‘dead’ in this project were oddly prescient in their time, like Wingspan Bank, a no-fee online-only bank,” he explained, “and Funbug, a gaming platform where users could earn and spend a proprietary private currency, which could be converted into fiat.”

Outernet Arts is part of a new media, culture and entertainment district housed in The Now Building in Soho. The four-storey space, which will be open to the public for free, has immersive galleries kitted out with 23,000 square feet of floor-to-ceiling, wrap-around video screens.

The London venue is the first of a global roll out, with sites anticipated to open in Los Angeles, New York and Asia.

The inaugural project by Simon Denny will be followed up by a VR reimagining of Hilma af Klint’s “The Temple” works, presented by Acute Art in December. From February, Outernet Arts’ curator Marco Brambilla will stage his VR and video art installation Heaven’s Gate for the first time in Europe.

Dotcom Seance is on view from October 16 through December 4, 2022, at Outernet Arts, The Now Building, Centre Point, London, every Sunday between 12 p.m.–6 p.m.