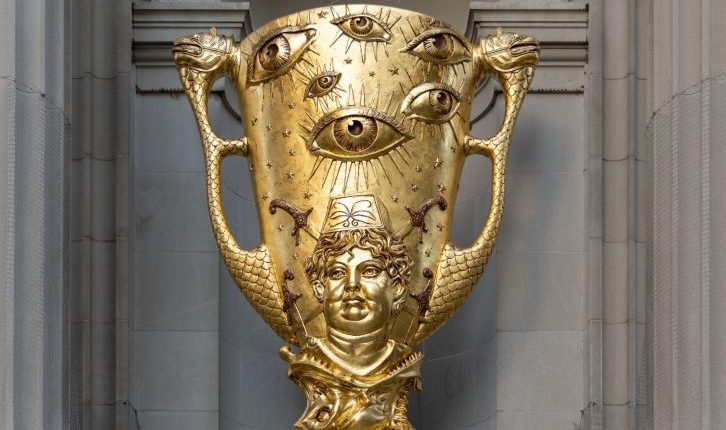 The works are part of the museum’s Facade Commission series, first launched in 2019 with sculptures by Wangechi Mutu, followed up by Carol Bove in 2021. Locke is the third artist to take on the public platforms.

Frequent visitors to the museum should be able to spot references to some of the Met’s best-known works packed onto the trophies’ detailed surfaces. These are intended to encourage visitors to think more deeply about the stories behind the collection.

“All the objects here have complex histories, and for each one you could make a feature film out of the story behind it,” Locke explained to Artnet News.

Entitled Gilt, a pun on the word “guilt”, the works reframe the priceless objects held by museums like the Met as prizes, things to be won by collectors and institutions. Inevitably, the objects origins and journeys are tangled up in shifting power structures and the rise and fall of empires. The inherent violence of this history is captured in the fragmentation of the outermost works, which appear to have been damaged.

“The Met has been one of my obsessions for the past two decades,” said Locke, who jumped at the invitation to do the commission. “Every time I come to New York, I will spend a day gently drifting around like the monster we all are when we come here, consuming this stuff. Gorging ourselves on the wonders of the world.”

“It’s one of my favorite places,” the artist added. “But then I ask myself, what am I gorging myself on?”

At the base of the trophies are the gaping, ravenous mouth of a sea monster, a detail taken from Domenico Guidi’s Andromeda and the Sea Monster (1694). Each is topped with a cluster of all-seeing eyes, which we might easily perceive as staring us down or judging us.

Among the other works from the collection picked out by Locke for their ambiguous histories is a bronze statue of a boy in Eastern dress, which was found in Egypt but has been identified as a portrait of Alexander Helios, the son of Mark Anthony and Cleopatra.

An 18th-century flintlock once owned by the South Indian ruler Tipu Sultan, and later seized by the British as a spoil of war, is represented here by the tiger heads crowing each handle. Installation view of Trophy 2 and Trophy 3 for the Met’s Facade Commission: Hew Locke, Gilt (2022). Photo courtesy of The Metropolitan Museum of Art; by Anna-Marie Kellen.

“For me, the Met facade is a scary place to exhibit,” Locke admitted. “The pillars alone could visually destroy your work. The pieces are in gold to fight against the pillars.”

Those looking closely at the trophies as they enter the building will spot that they are in fact flat surfaces propped up by poles.

“It’s all an illusion,” explained Locke. “It’s a facade on the facade of the museum. I’m playing games and tricks with the viewer, because what they’re seeing is not real.”

In this sense, the trophies echo an apartment building opposite the Met on Fifth Avenue, which was built with a fake rooftop floor visibly propped up by beams.

It’s also a reference El Dorado, Locke explained. “Shining gold, dreams of gold, but the gold wasn’t real. The Spanish conquistadors found lots of gold but they also found pieces of tumbaga, which looks like gold but isn’t.”

Locke, who was born in Scotland but raised in Guyana before returning to the U.K. in 1980, also opened The Procession earlier this year, a special commission for Tate Britain in London. The mammoth work, which contains almost 100 unique life-size figures, runs through the museum and is filled with references to empire, race and history.

“Spectacle is something I’ve always been interested in,” Locke said. “The idea of creating something overwhelming, something that is bigger than myself but is also intimate and can draw people in.”

Hew Locke’s “Gilt” is on view at the Metropolitan Museum of Art in New York through May 22, 2023.

Here Are Our Highlights From New York Fashion Week (Hint: They’re All About Art)