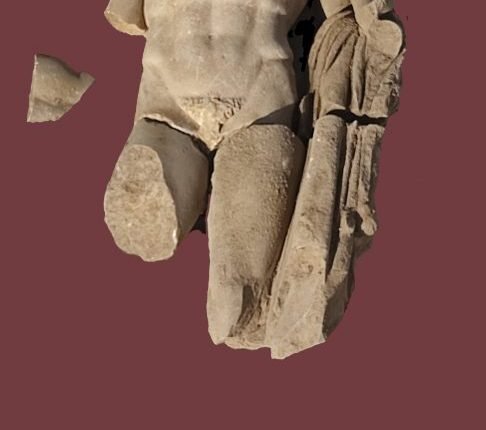 Archaeologists have unearthed a 2,000-year-old statue of the Roman God Hercules at the site of the ancient Greek city of Philippi in Northern Greece. Philippi has long been believed to be one of the most promising archaeological sites in the country; the discovery of this large Roman statue situated in a town square is one of the most significant finds to date.

The larger-than-life statue was discovered by a team from the Aristotle University of Thessaloniki led by professor Natalia Poulou, assistant professor Anastasios Tantsis, and professor emeritus Aristotle Menzo along with a team of 28 students. The group conducted the excavation at the point where two streets converge and open out into a main square where they uncovered an ornate building and what is thought to be a fountain. According to myth, Hercules (the Roman counterpart to the Greek Heracles and the son of Zeus) killed his wife and children after being driven mad by his stepmother Hera. To atone, he fulfilled “the 12 labors of Hercules,” culminating in him being tasked to enter Hades and capture Cerberus, the six-headed dog that guards the gates of hell, bringing him back to the mortal plane. Hercules represents the overcoming of one’s demons and is recognized as a champion of the weak. The statue dates from 2 A.D. and was attached to the building, which dates from 7–8 A.D. It shows the demigod carrying a club and holding a lion pelt with a wreath of vine leaves—a triumphant stance. It was customary in the Byzantine period for buildings and public spaces to be decorated with Roman statues like this one, but the size and quality of the statue is remarkable, experts said. Established by Philip II, King of Macedon Philippi was built on the Thasian colony of Crenides on the Aegean Sea and was later abandoned after the Ottomans conquered the region in the 14th century. Although it was known to be a site of archaeological importance, it was not excavated until 1914. After the dig was abandoned due to World War I, work was resumed in 1920 and again after World War II. The excavations are ongoing.

Wet Paint in the Wild: Curator Roya Sachs Goes Backstage to Produce Some Art Wizardry at a Psychedelic Music Festival

Want to Make Some Mind-Blowing AI Art at Home? DALL-E Is Now Freely Available to All Humans