After 19 Bitter Days on Strike, the Philadelphia Museum of Art’s Union Has Reached a Tentative Deal With Management 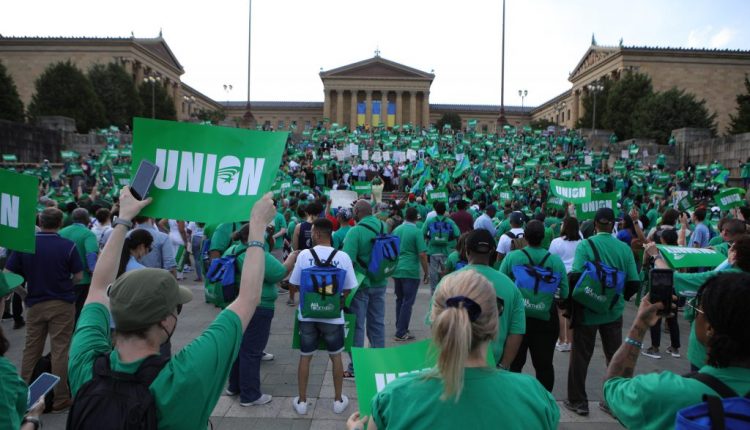 After 19 days of a strike by Philadelphia Museum of Art workers—and two years of negotiations—the PMA Union announced on Friday, October 14, that its bargaining team had reached a “tentative agreement” with museum management on a contract.

The museum had remained open, but the strike had been bitter, with workers alleging that the museum was bringing in scab labor to install its upcoming Henri Matisse show and decrying new director Sasha Suda for not engaging. This week the Philadelphia Inquirer reported that signs glimpsed on the picket line included, “Hey Sasha, Stop Hiding” and “NO Contract NO Matisse.”

According to a Friday afternoon press release from the PMA Union, however, the show of force by workers has yielded real results on all the issues in dispute:

The tentative agreement, which runs through June 30, 2025, includes wage increases totaling 14% across the life of the contract, with the first increase retroactive to July 1, when non-union PMA employees received raises; substantial reduction to the cost of the healthcare plan most union members use; four weeks of paid parental leave, an increase from zero; an increase in the minimum hourly wage at the museum to $16.75 an hour; the institution of the museum’s first-ever longevity raises; and more.

The union executive board “voted unanimously” to recommend the new agreement. The contract now goes to the membership to be ratified. (PMA Union is an affiliate of the American Federation of State, County and Municipal Employees and represents some 180 employees from all departments.)

19th day of our historic strike: @PMA_Union has reached a tentative agreement with @philamuseum management!! There were 5 issues going into the strike. We got all 5. Management claimed they wouldn’t move. They did. Say it with us: UNITED WE FIGHT UNITED WE WIN pic.twitter.com/yKvCXykZBJ

If the contract passes, the PMA Union workers will return to work on Monday. “Matisse in the 1930s” is set officially to open at the museum on October 20. The union had been set to protest the members’ opening this Saturday.

Earlier this week, a museum spokesperson admitted to the Inquirer that while it had sold more than 3,000 advance tickets for the hotly anticipated Matisse show, the strike had “caused some people to be reluctant to attend the exhibit and events such as its Members Only Previews this weekend.”

The nearly three-week strike has been part of a season of labor activism in museums and art institutions across the United States. Its victory is likely to have wider effects, adding fire to these organizing campaigns.

Workers at the Brooklyn Museum of Art picketed outside the opening of their institution’s newly renovated Asian and Islamic art galleries earlier this month asking for movement in their contract negotiations. In Pittsburgh, the opening of the Carnegie International was met by protests from workers demanding movement on their demands. In June, MFA Boston workers reached their first-ever union contract following months of agitation that included a one-day strike last year.