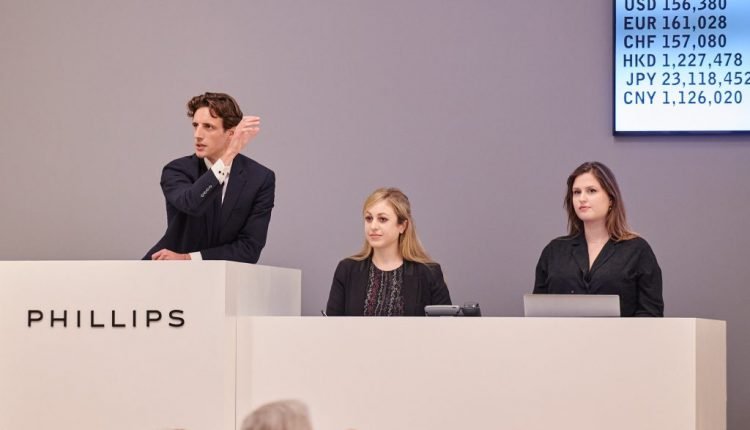 Phillips achieved £18.7 million ($20.9 million) during its Frieze week 20th-century and contemporary art evening sale in London on Friday, a result squarely within the presale expectations of £14.8 million to £21 million ($16.5 million to $23.5 million) and with a 94 percent sell-through rate. (All auction prices include fees unless otherwise stated; presale estimates do not include fees.)

The auction house continued to live up to its reputation of introducing younger talent through its sales, setting a few new artist records. The total was also a slight increase from June’s evening sale total of £17.5 million ($21.3 million), despite market uncertainties and the pound’s weakening against the dollar.

The U.K.’s troubled economy, however, could translate into an advantage for the country’s art market. Just hours before the Phillips sale kicked off, U.K. prime minister Liz Truss sacked chancellor Kwasi Kwarteng over a controversial mini-budget that had sent the pound to a record low. But the bad news did not seem to have an impact in the Berkeley Street salesroom, which was packed with bidders and observers enjoying the free flow of champagne. The weak pound might have made the sale even more appealing to international collectors, many of whom are in town for the Frieze art fair. It attracted bidders from 38 countries, with a number of U.S. collectors bidding online and 32 percent of registered bidders coming from Asia.

“Because of the weakness of sterling, things were comparatively cheap, if you’re paying in dollars,” Stephen Brooks, Phillips’s CEO, told Artnet News after the sale, adding that the middle market in particular seemed strong. “This was a global participation, and London will have looked like good value.”

Friday night’s evening sale total, however, is obviously lower when compared to last year, when the auction house achieved £26.3 million ($34.7 million) during its October 2021 sale, as well as the pre-pandemic 2019 sale result, which totaled £25.9 million ($31.9 million). Of the 33 lots offered on Friday evening, only two went unsold (four works, however, including paintings by Cecily Brown, Pierre Soulages, and Sigmar Polke, and a Damien Hirst sculpture, were withdrawn before the sale). And works by Alberto Burri, Yayoi Kusama, Banksy, and Marc Chagall carried third-party guarantees.

Records were set for artists such as British painter Michaela Yearwood-Dan, whose 2021 work Coping Mechanisms sold for £239,400 ($267,400)—more than five times above her previous record, also set at Phillips in London this June, and nearly eight times above the higher end of the presale estimate of £30,000 ($33,500). The abstract painting went to an online buyer from Japan.

The sale was also the auction debut for some artists, including the 1988-born American painter Julian Pace. His portrait Kanye drew fierce competition from various bidders but it eventually sold for £113,400 ($126,800) to an online bidder from China, more than three times its presale estimate. And Pencil Flipper by Rebecca Ness, another auction first-timer, sold for £119,700 ($133,800) to a Hong Kong bidder online.

Meanwhile, a 2011 untitled finger painting by Japanese artist Ayako Rokkaku—now among the top five best-selling Japanese artists according to Artnet Price Database—sold to an Asian bidder in the room for £296,100 ($331,050). Although the artist has had works come to day sales and online auctions, this was her first appearance in a major London evening sale.

Despite the records and fresh names, the sale at times dragged on due to a relatively long bidding process for some of the lots, with phone bidders showing signs of uncertainty. A monumental work by Mark Bradford, Nodding Gunpowder (2013), estimated at £2 million–£3 million ($2.2 million–$3.4 million), and a large-scale paint and photo collage by John Baldessari, Female and Male Faces (With Notations) with Black and White Commentary (1989), estimated at £250,000–£350,000 ($280,000–$392,000), both went unsold at the end of the evening.