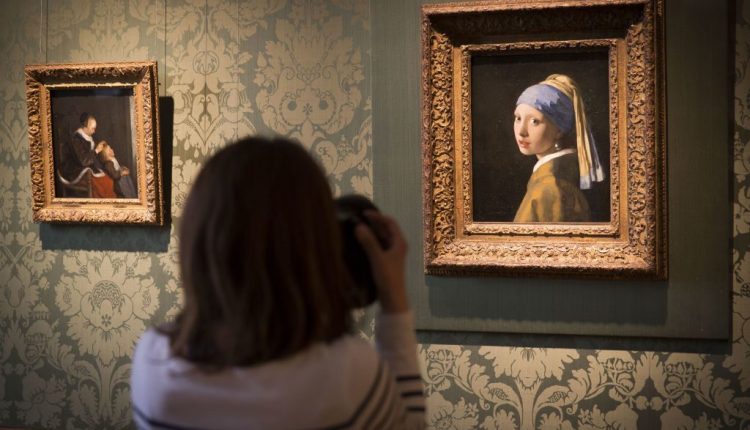 Johannes Vermeer’s beloved masterpiece Girl With a Pearl Earring has become the latest painting targeted by climate activists. A member of Just Stop Oil superglued his head to the painting, which is displayed behind glass at the Mauritshuis museum in The Hague.

The artwork was not damaged, according to representatives from the museum. Police have arrested three subjects, all Belgian men in their 40s, and the gallery where the work is normally on view has been temporarily closed to the public.

“The condition of the painting has been investigated by our conservators. Fortunately, the glazed masterpiece was not damaged. The Girl with a Pearl Earring will be back on view as soon possible,” the museum said in a statement. “Art is defenseless, and the Mauritshuis firmly rejects attempts to damage it for any purpose whatsoever.”

A video of the incident can viewed on Twitter, showing two men wearing Just Stop Oil approaching the painting. One attempted to glue his head to the Dutch Golden Age canvas, while the other glued his hand to the wall next to the work and dumped a can of what appeared to be tomatoes on his partner’s head.

Though the protestor tried to reassure other museum videos that the artwork is behind glass, an onlooker responded by shouting “Shame on you!”

A second video shows the two men being escorted away by police officers. Meanwhile, activists from the group Scientist Rebellion recently glued themselves to the floor of the Volkswagen Museum in Wolfsburg, Germany, and were distraught when, instead of calling police, staff closed up for the night and left them there, allegedly unable to use the bathroom. The protest ultimately lasted two nights before the authorities arrested participants.

14 of our brave scientists are still occupying @Autostadt, ready to spend another night.

They demand that the CEO of @Volkswagen, Oliver Blume, talk to them, and immediately advocate for a speed limit of 100 km/h in Germany. #UniteAgainstClimateFailure pic.twitter.com/tDKuNeVrnd

By incorporating foodstuffs, the protests have escalated from earlier actions where participants glued themselves only to famous artworks’ frames. Activists are attempting to tread a fine line by equating the fragile nature of historic artworks to the grave threat faced by our planet without actually harming our shared cultural heritage.

“The message is clear: if humanity does not immediately stop using fossil fuels, it will become extinct,” Just Stop Oil said in statement, according to Reuters. “They would never defile a work of art not covered with protective glass.”

But many are critical of the activists’ approach.

“Everyone has the right to make a point,” Dutch junior minister for culture Gunay Uslu wrote on Twitter. “But please: leave our shared heritage alone. Attacking defenseless works of art is not the right way.”

The U.K. Is on Its Third Prime Minister in Seven Weeks. Here’s What the Art Market Believes Rishi Sunak Needs to Prioritize

‘More Is More’: How the Artist Known as Machine Dazzle Layers Theater, Design, and Dance for a New ‘Rock ‘n’ Roll Cabaret’