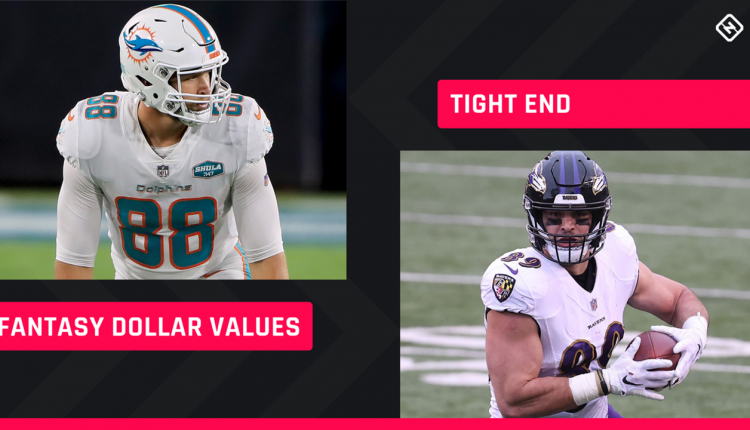 Tight end is a bit of a “stars-and-scrubs” position for many in fantasy football auctions. If you subscribe to that strategy in 2021, you’ll be deciding between paying up for Travis Kelce, George Kittle, or Darren Waller or getting two guys for $5 or less. The good news is that with this position, you don’t necessarily have to dip down into the “scrubs” if you go cheap. Those players can more accurately be called high-upside sleepers or even stable veterans. As you can see from FantasyPros’ projected TE dollar values below, there aren’t many top-tier tight ends who will command a significant portion of your budget.

Most fantasy owners can’t stomach the hit of paying upwards of $40 for Kelce — not when they can get someone like Dallas Goedert for over $30 cheaper. But, as we pointed out in our standard-league TE rankings, Kelce outscored Waller by 36.2 fantasy points last year, and Waller outscored No. 3 TE, Robert Tonyan, by 47 points. After that, Nos. 3-19 were closer in points than Tonyan was to Waller. Even if Kittle stays healthy and joins that elite tier again this year, the difference between the very best tight ends and even the second tier, never mind the third and fourth tiers, is season changing.

Of course, if you hit on “this year’s Waller” for $7, then you’re really ahead of everyone else in your league. We knew Waller was good heading into last year, but after upping his receptions by 17, his yards by 51, and his TDs by six, he graduated to the elite class. Could that be Noah Fant this year (third-year breakout candidate)? T.J. Hockenson (possibly the top target in Detroit)? Tyler Higbee (no Gerald Everett, better QB)? It could, but it just as easily be Goedert, Irv Smith Jr., or rookie Kyle Pitts. Perhaps even more worrisome — it could just as easily be nobody.

This doesn’t mean you definitely bid top dollar on Kelce, Kittle, or Waller. That’s certainly not a bad option, but if you decide to go cheaper, just make sure to give yourself options. Getting at least two potential breakouts is smart. It’s better to do that than overbid up to $20 on a mid-tier guy. That could still pay off if he has a huge year, but this is the one position where you can easily get stuck in no-man’s land.

One bit of good news is that there isn’t much difference in TE values between standard-league and PPR formats, so we’re looking at roughly the same crowd for both. A few, such as Waller, Hockenson, and Logan Thomas, command a few extra bucks in PPR leagues, while a couple others, such as Mark Andrews, Tonyan, and Rob Gronkowski, lose a little value because they’re more TD dependent, but overall, your auction strategy won’t change much at this position because of the format.

We’ll update these TE auction values until Week 1, so check back for updates.

All TEs not listed valued at $0.

Scoring based on full-point PPR formats.

All TEs not listed valued at $0.