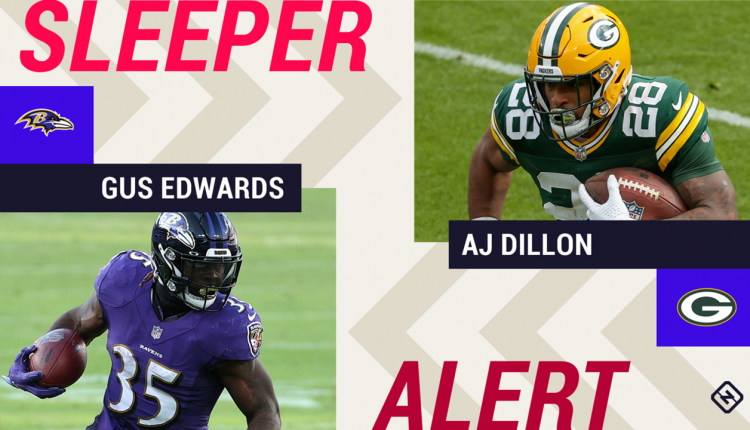 There’s no hotter commodity in a fantasy football draft than a running back sleeper. Everyone wants to round out their picks with two or three steals (often rookies) who will emerge at some point this year and take over. Fortunately, there’s no shortage of breakout candidates considering how common injuries are at this position. When you add in the potential for COVID-related absences again in 2021, you can expect a good chunk of the league to start multiple RBs at various points this season. Any backup can have value if they get 15-plus touches per game, so you need to know more than just the top-75 RB rankings your backs’ immediate handcuffs — you damn near need to know every teams’ entire depth chart.

The list below is far from a complete list of 2021 RB sleepers (again, any backup has potential if a starter gets injured), but after looking at consensus rankings and average draft positions, these guys stand out as candidates to outproduce their preseason outlooks. Some are obvious, like rookies Javonte Williams, Michael Carter, and Trey Sermon, while others are veterans who have don’t inspire much excitement anymore (Phillip Lindsay, Justin Jackson, and Jamaal Williams). We also have a few deep sleepers who could start the year on the practice squad but eventually find their way to playing time. They’re total guesses, but given their situations, we feel they’re worth specifically mentioning.

Those are the most exciting types of sleepers to many fantasy owners. It’s a thrill to draft or pick up someone the rest of your league hasn’t heard of and watch as he has a great stretch of games. The odds of that happening are pretty low, though. Hitting a homer with a total lotto ticket might be the epitome of sleeper success, but cracking a double with an underrated committee back who can work as a flex most weeks is pretty good, too. Don’t sleep on the thrill of the latter.

Basically, if a team has question marks at starting RB — be it because of a committee, injury worries, experience, or all of the above — then it’s worth wondering who will eventually see the most carries in its backfield. It might wind up being someone off the radar right now, but you can’t really prepare for that right now. All you can do is study the shaky situations and know who the next-man-up is.

Javonte Williams, Broncos. Williams will be competing with veteran Melvin Gordon for touches, but even if the talented rookie isn’t starting in Week 1, he has more long-term potential because of his explosiveness. In his final season at North Carolina, Williams totaled 1,445 yards and 22 TDs while averaging 7.9 yards per touch. The Broncos offense has a lot of talent but also a lot of question marks. Williams can be a stabilizing force if the coaching staff lets him. It would be foolish to completely write off the 28-year-old Gordon, who posted 1,144 total yards, 4.6 yards/carry, and 10 TDs last year, but Denver drafted Williams early in the second round for a reason.

Gus Edwards, Ravens. Everyone is excited about JK Dobbins this year — and deservedly so — but don’t sleep on Edwards. He’s posted at least 700 yards and averaged at least 5.0 yards/carry in each of his three seasons, so you know he’s going to produce on the ground. With Mark Ingram gone, his path to production is even more open. He might not crack double-digit receptions, but it wouldn’t be a complete shock if Edwards wound up getting more touches than Dobbins and starred in the Ravens backfield. Either way, he’s being undervalued in drafts. Consider Edwards more of a 1B to Dobbins’ 1A than merely a traditional handcuff.

Michael Carter, Jets. Carter is competing with Tevin Coleman and La’Mical Perine for carries, but it’s tough to trust either after they averaged 1.9 and 3.6 yards/carry last year, respectively. Carter posted back-to-back 1,000-yard seasons at North Carolina and averaged a whopping 8.0 yards/carry in his final season. He’s the most explosive player in New York’s backfield and should eventually see the most touches. Both Coleman and Perine have upside if they’re getting the bulk of the carries, but Carter, even at 5-8, 201 pounds, is still the guy to root for in this backfield.

Phillip Lindsay, Texans. David Johnson had a surprise bounce-back season last year, posting 1,005 total yards and eight TDs while averaging a career-high 4.7 yards/carry in 12 games. Even so, the Texans picked up Lindsay in the offseason, and fantasy owners shouldn’t ignore him. Lindsay started his career with back-to-back 1,000-yard seasons before struggling in an injury-plagued 2020. Lindsay still has a career 4.8 yards/carry average, and despite his size (5-8 ,190 pounds), he’s a tough inside runner. Johnson might begin the season as Houston’s starter, but given his injury history and age (29), Lindsay could wind up outproducing him for the season. Don’t let Lindsay fall too far behind Johnson in drafts.

Jamaal Williams, Lions. Williams was consistently solid in his four years with the Packers, but he rarely starred outside of the occasional good game. Now with Detroit, he’ll once again work in a complementary role (behind D’Andre Swift), but the Lions have a strong offensive line and very little going for them in the receiving game. That should open up more opportunities for Williams, both as a runner and a pass-catcher. It will likely take a Swift injury for Williams to really go off, but he’s capable of outproducing his ADP and being an every-week flex, at least in PPR formats.

AJ Dillon, Packers. When a guy is 6-0, 247 pounds and has both “Quadfather” and “Quadzilla” listed on his PFR page as nicknames, you want to give him your full attention. Dillon didn’t play much as a third-string rookie last year, but he did average 5.3 yards/carry in limited action and went off in the one games where he did get significant touches, posting a 21-124-2 line in a Week 16 game against Tennessee. With Jamaal Williams gone, Dillon takes over the primary backup role to Aaron Jones, so he’s primed for 120-plus carries. At last year’s rate, that would yield around 700 rushing yards and a five-to-six TDs. The potential is there for more with the supremely talented Dillon even in a backup role, and if anything happens to Jones, look out. Dillon would immediately vie for top-10 consideration.

Tony Pollard, Cowboys. Pollard has played well in his first two seasons, averaging 4.8 yards/carry and showcasing solid receiving skills. When Ezekiel Elliott out in Week 15, Pollard took advantage, running 12 times for 69 yards and two scores against the 49ers. With Elliott coming off a down year, it’s fair to wonder if Pollard will see more touches, and in Dallas’s high-powered offense, even 10 touches per game would give him flex value. If Elliott gets hurt, Pollard’s value would really take off. If you draft Elliott, be prepared to overpay for Pollard because he’s the type of backup other owners will draft in the middle rounds, too.

Trey Sermon, 49ers. Sermon had a decent college career split between Oklahoma and Ohio State, but he saved his best performances for the Big 10 Championship and Sugar Bowl last year, rushing for a combined 524 yards and three TDs while adding another 65 receiving yards on seven catches. The 6-1, 215-pound Sermon ran a 4.57 40-yard dash and doesn’t wow with any other measurables, but you know if he gets consistent touches in the 49ers system, he’ll be productive. Raheem Mostert won’t stay healthy, and even if he does, we know San Francisco will use multiple ball carriers. Wayne Gallman will probably more involved than any of us want, but Sermon still has major breakout potential.

Justin Jackson, Chargers. Jackson is just as likely to get cut as he is have a good year, so proceed with caution here. That said, the Chargers need a true “lead back” to complement receiving ace Austin Ekeler, and last year’s popular rookie sleeper, Joshua Kelley, repeatedly flopped in his attempts to take over the lead role when Ekeler was hurt (3.2 yards/carry). Perhaps Kelley will bounce back and get first crack at the 1B job, but Jackson outplayed him last year (when he wasn’t missing seven games because of toe, quad, and knee injuries). Jackson averaged 4.6 yards/carry (4.9 for his career) and caught 19 passes for 173 yards in a similar campaign as his rookie season. It’s tough get too excited about Jackson, but someone figures to emerge in this backfield. If it’s not Jackson or Kelley, then you’re looking at sixth-round rookie Larry Rountree III, who produced well in his career at Mizzou (5.0 yard/carry, 40 TDs). For now, we’ll err on the side of the veteran.

Rhamondre Stevenson, Patriots. The 6-0, 231-pound Stevenson might very well be on the inactive list early in the season (he is a Patriots RB after all), but he has upside if he finds his way into the lineup. The Patriots are notorious for shenanigans with their RBs, and even though Damien Harris looks to be “the guy” in New England, no one would be shocked Stevenson started stealing carries or being used as a goal-line hammer. Stevenson averaged 7.2 yards/carry and scored 13 TDs in 19 career games at Oklahoma, and he even showed some receiving chops with 18 catches and 211 yards in just six games last year. He presents the kind of unique skillset Bill Belichick loves to use, so fantasy owners should have him high on their watchlists.

Xavier Jones/Jake Funk, Rams. Does anyone really trust Darrell Henderson to last the full season as the Rams’ feature back? Maybe he will — or maybe L.A. will sign a veteran like Le’Veon Bell or Todd Gurley — but until they pick up someone else, undrafted Jones and seventh-round pick Funk are the most likely candidates to siphon carries. At 5-10, 204 pounds with 4.49 speed, Funk has similar size but more speed than Jones (5-11, 208 pounds, 4.54), but Jones was far more productive in career at SMU than Funk was at Maryland. Neither of these backs really stand out, but they figure to get shots at playing time early in the year.

Javian Hawkins/Caleb Huntley, Falcons. Mike Davis and Cordarrelle Patterson are currently atop Atlanta’s RB depth chart. Anyone trust them to last in those spots all year? After them, you have Qadree Allison, who’s had some sleeper buzz of his own at times but totaled just one carry in three games last year. With all that said, we’re going off the board for some sleeper picks here and highlighting rookie free agents Huntley and Hawkins. The former is a 5-10, 229-pound bruiser who scored 18 TDs in 15 games his final two seasons at Ball State. Huntley is a 5-9, 196-pound speedster who posted 2,347 rushing yards, 20 catches, 185 receiving yards, and 17 total TDs in two seasons at Louisville. They could form a solid thunder-and-lightning duo if given the chance, but as it stands, Hawkins is a little more interesting due to his versatility and speed.