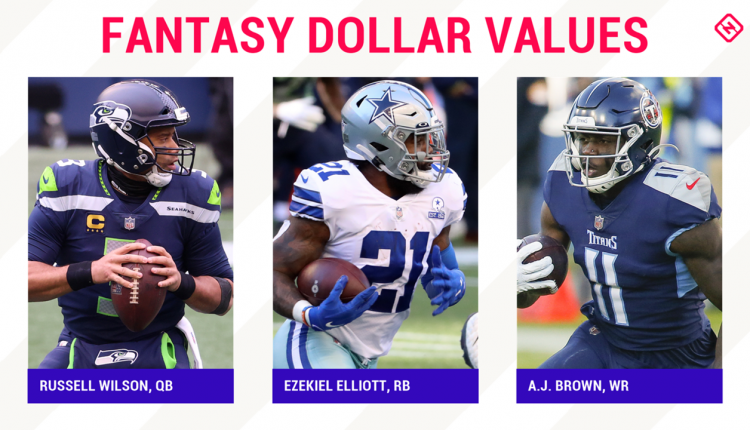 Welcome to fantasy football auction season, 2021 edition. For many, auctions are the only way to “draft,” and whether you’re doing in-person bidding wars or online versions, it’s always a fun, fast, and frustrating night. Anyone who’s done even one auction knows dollar value projections are nice to have even though the final prices for many players will be noticeably different. If nothing else, an auction value cheat sheet can help shape your strategy by providing a general expectation of what to bid on players in the top tier and sleepers in the middle and lower tiers.

Your auction might see Jonathan Taylor go for $55 instead of his projected $49 or Dak Prescott go for $15 instead of his projected $18, but either way, the final bids won’t be too far off from other second-tier players at their respective positions. FantasyPros has simply aggregated the experts’ consensus from the top fantasy sites to give you this guide. Use it at your own discretion, and be prepared for chaos when your real auction starts.

Said “chaos” usually begins with a surprise bidding war between two or three owners locked in on the same “must-have sleeper” or top-tier stud. If someone came into your auction dead set on getting Derrick Henry, then his price could easily climb past Christian McCaffrey’s eventual cost. Often, you’ll see breakout picks like Javonte Williams or CeeDee Lamb far exceed their projections, and occasionally, even guys expected to go for just a couple bucks can approach or surpass double-digits.

As we mentioned, owners’ motivations have a lot to do with this, but perhaps even more consequential is when certain players are nominated. The beginning of auctions, when everyone is flush with cash, can resemble a bunch of spoiled rich kids in Vegas for the first time — reckless spending with no regard for the future. Every owner wants to make an early splash, and they have the budget to get any player they want. Sometimes, you’ll see more timid approaches, with disciplined owners waiting patiently for the perfect targets.

Regardless of how your auction begins, it will end the same — bidding wars between the two or three owners that still have money left, particularly for the last players of a certain tier, followed by a bunch of sad $1 nominations that no one bids up.

To be fair, that’s a good metaphor for how many fantasy seasons go: Full of promise and activity early on; disappointment and disinterest late. Of course, there will be at least one owner in your auction who will get most of his or her targets, round out their position players without getting caught in bidding wars, and spend their last $2 on a D/ST and kicker — just how it’s supposed to be done. That won’t necessarily be the owner who wins your league, but that efficiency, discipline, and competency is what’s needed to take home a championship.

We’ll be adjusting these dollar value projections until Week 1, so check back for updates!

All players not listed valued at $0.

Scoring based on full-point PPR formats with four-point passing TDs.

All players not listed are valued at $0.