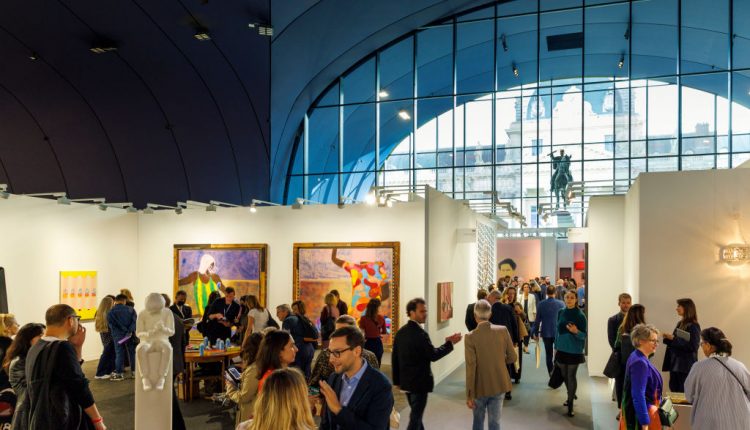 As the inaugural edition of Paris+ by Art Basel opens to great excitement in the Grand Palais Éphémère near the Eiffel Tower today, we take a look at some of the important figures and tastemakers in the French art market. In the space of a year, Clément Delépine’s life has changed dramatically. Born near Paris in 1981, he had worked at Bortolami in New York, at the gallery of Jean-Gabriel Mitterrand in Paris, and as co-director of Paris Internationale by the time Art Basel global director Marc Spiegler got in touch and asked him to direct Paris+.

“Several people had recommended me to Marc,” he told Artnet News, explaining that Spiegler wanted to bring a new, fresher energy to Paris+, which replaces FIAC in the Grand Palais Éphémère. Delépine had just seven months to put the fair together, describing the result as both familiar and new. As MCH Group (owners of Art Basel) has a seven-year-long contract, the big changes that the Art Basel-appointed team wants to implement, such as cross-pollinations with fashion, design, and cinema, will be developed in subsequent editions. As president of the Professional Committee of Art Galleries, Marion Papillon—who has an eponymous, contemporary art gallery—advocates for 300 French galleries, from antique dealers to those running emerging commercial spaces. Responsibilities include pushing for better art market regulations and contributing to cultural policies that would benefit the sector’s development. Papillon is also the founder of Paris Gallery Weekend, which takes places annually in May.

On the subject of Paris+, she said: “Paris+ has been attentive to the selection of French galleries; even though some are missing, the proposal is coherent. This needs to lead to a strengthening of the French market on an international level in order to give a give a stronger impetus to the French scene, its artists, and galleries.” Suzanne Pagé has been at the helm of the Frank Gehry-designed Fondation Louis Vuitton since its inauguration in 2014. Over the last eight years, the foundation has become a key venue that has participated in the resurgence of the Paris scene. Following exhibitions on artists such as Olafur Eliasson, the current show, ‘Monet-Mitchell’, marvellously juxtaposes Claude Monet’s later period, particularly his water lilies, with the oeuvre of American artist Joan Mitchell.

Prior to moving to the Fondation Louis Vuitton, Pagé was director of the Musée d’Art Moderne de la Ville de Paris where she mounted exhibitions on international artists such as Matthew Barney and Georg Baselitz. Rebecca Lamarche-Vadel, director of Lafayette Anticipations and former curator at the Palais de Tokyo, is behind this season’s double exhibition of Cyprien Gaillard across both venues. “Cyprien is a major artist whose work has been seen too rarely in Paris,” she said. “It’s important to be able to immerse yourself in the work of an artist whose obsessions with disappearance, rebirth, order, and disorder are so relevant today.”

Lamarche-Vadel has previously curated exhibitions on Tomás Saraceno and Tino Seghal, both at the Palais de Tokyo, as well as the Riga Biennale in 2020. Her aim with her role at Lafayette Anticipations is to create “a bold, generous institution that lives to the rhythm of its time, convinced that artists are the guides we need to reinvent and enrich our ways of being in the world.” Florence Bonnefous co-founded Air de Paris with Edouard Merino in 1990 in Nice before moving to Paris and then to Komunuma, an arts complex in Romainville, northeast of the capital. Bonnefous is a committee member of Paris+ by Art Basel.

“There are certainly more American galleries compared to [Fiac] in 2021, but it’s similar to 2019,” Bonnefous said about the line-up. “Like other committee members, I was keen to consider our local scene like the others […] , following the criteria of quality and ethics.”

Bonnefous is also enthusiastic about extending the Paris art scene beyond the periphery of the city. “Undoubtedly, more galleries will follow our movement to Greater Paris, which responds to a natural tendency to seek out new spaces and a legitimate, joyful desire for new experiences.” Crèvecoeur has transitioned from being an emerging gallery into an important player in the Parisian art scene. After humble beginnings in Belleville, it opened a space in Marseille; today, it has a gallery in the upcoming Ménilmontant district of Paris and two addresses on the upmarket Left Bank. Notably, Alix Dionot-Morani and Axel Dibie were instrumental in co-founding the fair Paris Internationale for young, emerging galleries.

“Our vision was to create a fair made by galleries for galleries, without burdening them with the traditional costs associated with fairs, and bringing galleries of our generation to Paris who wouldn’t even think of applying to FIAC,” said Dibie, reflecting on the first edition held in a disused mansion in 2015. Reflecting on events this year, he added: “The dialogue between Paris Internationale and Paris+, an independent, cutting-edge gallery and the most established fair in the world, is emblematic of the plurality [of the Parisian scene].” As a curator, Laurence Dreyfus has organized international exhibitions on artists such as Michal Rovner and Edmund de Waal. As an advisor, she consults on private collections and is a member of the Chambre Européenne des Experts-Conseil en Oeuvres d’Art, a European association of art advisors. Each year, she also organizes a group exhibition, Chambres à part, at an exclusive Parisian address. This year’s 20th edition features works by Francis Alÿs, Rashid Johnson, and Claire Tabouret, among others, in a former Pierre Cardin store, which is eventually going to be transformed into a museum.

“The public and collectors are much more informed than 20 years ago,” Dreyfus said. “But the difficulty of obtaining premium quality, rare works has become harder because the war in Ukraine is having repercussions worldwide, [including] on the art market.” Inspired by her travels to Shanghai and Beijing, Alexandra Fain founded Asia Now with her father, Claude, in 2014 with the aim of bringing greater awareness to the art scene in Asia. “I wanted to give artists originating from Asia a space to become a part of the global conversation and a voice during Paris Art Week,” Fain said.

Previously held in a 19th-century building near the Arc de Triomphe, this year, the fair has relocated to the prestigious Monnaie de Paris, where coins have historically been minted. “La Monnaie, as a landmark in the centre of Paris, enables us to a cater to a larger audience; we’ll be hosting 284 artists at 78 galleries as well as special projects and performances.” When Christophe Person visited “All the World’s Futures,” the exhibition curated by Okwui Enwezor at the Venice Biennale in 2015, he had an epiphany. After a career in development finance, he did a masters in art law and business at Christie’s Education art school in London, U.K., and wrote his dissertation on the African art market. He went on to create the African contemporary art department at the French auction house Piasa before he moved to Artcurial to head up its department.

While initial market interest focused on Nigeria, South Africa, and French-speaking countries such as the Democratic Republic of Congo, Person’s eye is now looking further afield. “The art scenes in Uganda, Tanzania, Zimbabwe, and Kenya are very rich but we know very little about them,” said Persons, who co-founded a biannual sculpture exhibition in Burkina Faso together with photographer Nyaba Léon Ouedraogo in 2019, which presented 17 artists that year.

Behind TikTok’s boom: A legion of traumatised, $10-a-day content moderators